University College of Cork (also known as UCC) neighbours Cork English Academy (CEA). The University is situated at the top of Western Road, however as many locals know, its campus spreads the whole way across the city. As a student of Cork English Academy you will be get many opportunities to visit the historic University on our weekly social activities. Several of our students have followed their studies at CEA onto UCC.

UCC was founded 1845 and was originally known as Queen’s College, Cork, one of the 3 Queen’s College’s in Ireland the others located in Galway and Belfast. In 1908 the College was renamed to University College Cork. UCC began with 115 students and as of 2016 had over 21,000.

UCC has won Sunday’s Time University of the year 3 times. It is also the first University in the world who has received A Green Flag from the Foundation for Environmental Education. UCC has been ranked as one other world’s most sustainable campuses.

Some of the Highlight of Your Visit to UCC

Blarney Castle and Gardens is one of the most visited tourist sites in Ireland. Cork English Academy organises regular trips for our English language students as part of our Social Activity Programme.

The castle is believed to have been first constructed as a wooden house as far back as 1200. Approximately 10 years later, this was replaced by a stone structure. After the destruction of this building the Blarney castle we know today was built by Cormac Láidir MacCarthy, Lord of Muscry in 1446.

The exact origin of the famous Blarney stone is unknown however if you believe the legend this is a must see spot. For centuries there is a tradition to kiss the Blarney stone to give you the gift of eloquence (or gab)

Blarney House is on the castle grounds, it is a Scottish Baronial mansion designed by John Lanyon. While it was once a private home it is now open to the public, full of grand rooms and bursting with history. The house and castle gardens are one of the highlights of any visit. There are paths touring the grounds with signs pointing out the various attractions such as several natural rock formations with fanciful names such as Druid’s Circle, Witch’s Cave and the Wishing Steps.

Oguzhan is from Istanbul, Turkey. He started his English language journey at Cork English Academy back in September. Here is his story.

I’m a mechanical engineer. Due to my job, I need to communicate with companies and employees abroad. English is used as a common language. For this reason, I decided to study English. I chose Ireland for English education because I heard how helpful the Irish people are. I think Irish people are the people most like the Turkish people in the continent of Europe.

The reason I chose the city of Cork is that it is a small and safe city. Turkish people usually go to Dublin for English education. The only reason I wanted to be away from Turkish people was to always speak English and improve my level. During my four and a half months in Ireland, I travelled to Cork and Dublin. But I would love to visit other cities of Ireland in the spring. My favourite thing about Cork is that the buildings are small and you can always see the sky even in the city centre. This is very refreshing.
The thing I dislike most is the weather, of course.

I have improved my English more than I expected at Cork English Academy. Everyone at school helps a lot. I really want to work and live in Ireland in the future.

My name is Turki ,I’m from Saudi Arabia.I am happy to be in Cork to learn English. I found the people here very kind and friendly, I was able to make friends from the first day .

I had difficulties learning English, but the teachers helped me solve it, and my friends helped me to improve my speaking.

I liked the activities of the academy, I visited many places with them and I have beautiful memories.

A harbour city on Ireland’s west coast, sitting where the River Corrib meets the Atlantic Ocean. Galway is often referred to as the “Cultural Heart of Ireland” because of it’s strong ties to music, dance and the Irish language. Galway city is on the door step of Galway’s Gaeltacht ( an area where Irish is the first language) . The city is the 6th most populous city in Ireland with a population of about 79,900.

Only 1.5 hour drive from Galway city lies the exquisite Connemara. Known to be one of the most beautiful part of not just Ireland, but the world. Home to the Connemara National Park and the magnificent and historic Kylemore Abbey.

Galway city is full of hostels, hotels and B&B’s. The city is about a 3 hour drive from Cork city .

Get the City Link bus. Hop on at Patrick Quay, Cork direct to Galway 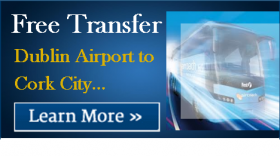